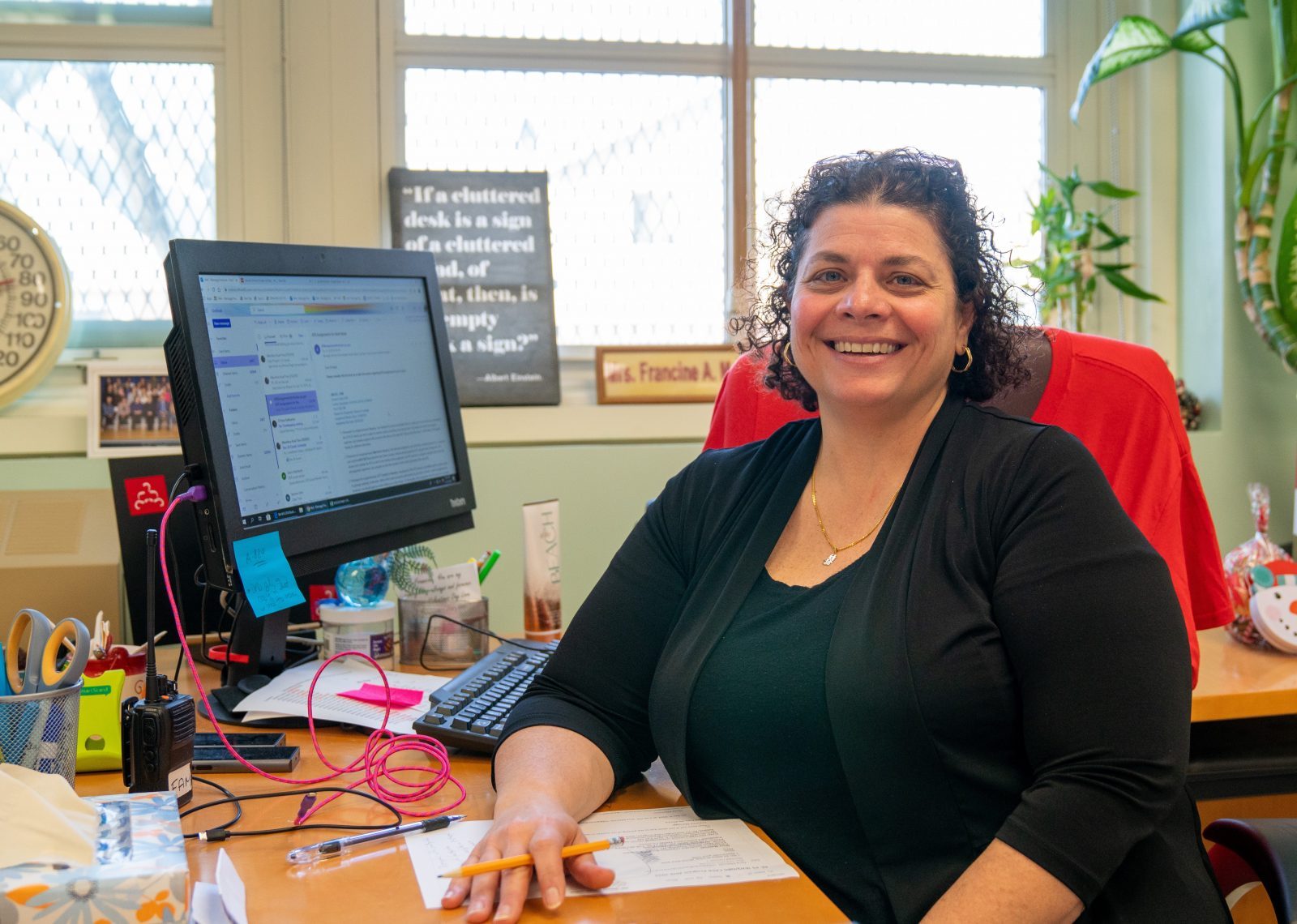 Throughout the 2019–2020 school year, our We Are DOE series will highlight some of the everyday heroes of NYC’s public schools. Featuring a cross-section of the DOE’s 140,000+ employees across the five boroughs, We Are DOE showcases some of the many unsung people who help keep the largest school system in the country running daily.

“When I first came here five years ago, parents had pushed the school to focus mainly on English instead of Mandarin starting in third grade because they thought that would lead to better scores on State tests. But by moving to a true dual-language, 50-50 approach throughout all grades, we have actually seen our test scores improve,” says Principal Marsaggi.

“Research shows that when students acquire two languages, they’re exercising their brain to perform and learn better,” says Francine Marsaggi, principal of P.S. 163 Flushing Heights, a Queens dual-language elementary school where most students spend half their class time learning in English and the other half in Mandarin.

Located in a predominantly Chinese neighborhood, P.S. 163 serves about 800 pre-k through fifth-grade students, about 80 percent of whom are Asian and most of the rest Hispanic/Latino. Interestingly, many of the Chinese families speak dialects other than Mandarin at home, like Cantonese and Fujianese. So the majority of entering pre-k and kindergartners arrive not knowing either of the two languages they will learn at school.

Still, a visitor to a third-grade English class at P.S. 163 would observe little difference in how students speak and write compared to a challenging lesson with only native English children. Christina Banome, the teacher of that class who has been at P.S. 163 for four years, says, “Even for Chinese students who have only been at the school for two years or fewer, their English is developing quickly and I really believe it’s because the dual-language approach helps them learn faster.”

Because of the positive results in schools like P.S. 163, the Department of Education during the administration of Mayor Bill de Blasio has added or grown about 390 bilingual programs while launching for the first time 100 pre-k dual language programs in nine languages (Bengali, Chinese, French, Haitian-Creole, Hebrew, Japanese, Russian, and Spanish) citywide. In total, there are approximately 671 bilingual programs in 13 languages serving 44,000 students in grades pre-k through 12.

Teacher Christina Banome says, “Even for Chinese students who have only been at the school for two years or fewer, their English is developing quickly and I really believe it’s because the dual-language approach helps them learn faster.”

At P.S. 163, Francine and her educators also go to great lengths to make families who may not speak English at home feel connected to the school, including by making home visits. “Basically the idea is how can we as a school community help you achieve the dreams that you want for your child? And it is definitely making an impact,” she says.

“For example, when we had an attendance issue with a Chinese family, my assistant principal and I went out to the house to visit with the child’s mother. She was a stay-at-home mom and she saw her son as her companion—she didn’t want him to go to school because she didn’t want to lose him. So we said that she didn’t just have to drop him off and leave. She could stay and have coffee, come to our events and parent workshops. Now she’s here all the time giving us hugs and high fives, and her son no longer has an attendance problem.”

P.S. 163 also has improved its climate by pursuing a variety of approaches to promote culturally responsive and social and emotional learning. “We don’t focus solely on academics because in a true dual-language program you’re also fostering a strong, positive culture,” Francine says.

One example is “EAR” time—short for Emotions, Actions, and Respect—when students talk about how they feel about challenges they face. In “Playworks,” younger students learn how to share with each other, and in a Monday morning read aloud, every class in the school listens to a story about children from different cultural heritages told on a flip board.

Together, these learning approaches have contributed to reductions in disciplinary incidents and improved ratings on parent surveys related to school climate to nearly 100 percent positive. Even parents who were skeptical about social and emotional learning initiatives have come to see that they have contributed to positive academic results.

Demographically, P.S. 163 has welcomed increasing numbers of Hispanic and black students whose families are excited by the school’s dual English-Mandarin model. Francine, who does not speak Mandarin, believes that mindset has strengthened the school by enabling students to learn from classmates with more diverse backgrounds. She says, “We had an African American father who wanted his children to keep learning Mandarin over the summer, so he paid a Chinese family to keep his kids from 9 to 4. They toured around together and it was almost like a foreign exchange program but a half a mile away. That’s how we’re breaking down barriers.”

We thank Principal Marsaggi, Christina Banome, the staff of P.S. 163, and the rest of the City’s dual-language educators for their work across NYC’s 671 bilingual programs in grades pre-k through 12.

Together, We Are DOE.

Official blog for the NYC Department of Education, home of over 1.1 million students across 1,800+ schools

Kids Can Get Free Meals All Summer Long

DOE CelebrationsFeaturedStories from the Classroom

The Year Ends, but the Work Continues