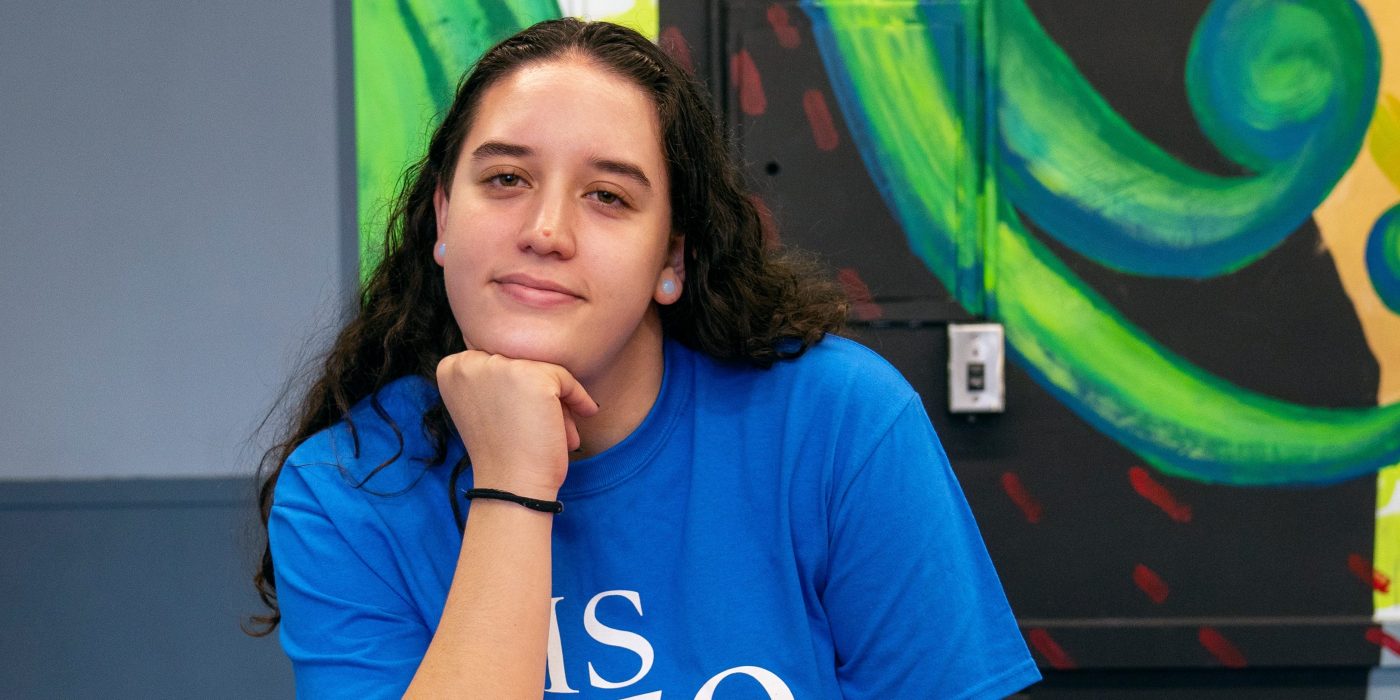 Throughout the 2019–2020 school year, our We Are DOE series will highlight some of the everyday heroes of NYC’s public schools. Featuring a cross-section of the DOE’s 140,000+ employees across the five boroughs, We Are DOE showcases some of the many unsung heroes who help keep the largest school system in the country running daily.

“By digging deeper and deeper into both sides of just one policy issue, debating makes students want to learn more all the time. I can see the curiosity in our students’ eyes, and along the way they gain confidence academically and express themselves more clearly.”

So says Miana Vega, coach of the policy debate team at M.S. 50 in Williamsburg, Brooklyn, which came in the top four in June 2019’s National Speech and Debate Tournament in Dallas, Texas—while making history as the first bilingual team on that stage.

That stunning accomplishment was all the more remarkable because Miana only joined the school in January 2018 and started to create the bilingual policy debate team at the beginning of 2019. She had been working for a variety of afterschool programs after receiving her diploma from Acorn Community High School in Crown Heights when she got up the nerve to contact her own former debate coach, Benjamin Honoroff, who had become principal at M.S. 50.

“I knew Honoroff was made principal two years earlier, but I was too afraid to reach out to him,” Miana recalls. “But he returned my email literally within minutes and asked me what my Social Security number was so we could start the process of becoming a paraprofessional at his school.”

Before starting at M.S. 50, Miana was once an NYC public school student. She graduated from Acorn Community High School in Brooklyn.

In contrast to the “public forum” format that M.S. 50’s existing debate teams engage in, with topics that change from month to month, policy debate teams dedicate their entire season to just one issue, and the debates themselves last much longer. Last year’s policy question related to expanding legal immigration.

Even though national-level school debate tournaments have been conducted entirely in English for more than 90 years, Principal Honoroff told Miana that she and her team would change that practice. “He told me that if we’re debating immigration, then we need to debate bilingually—no ifs, ands, or buts about it.” Miana’s bilingual team would speak in Spanish, and their opponents would listen through headsets to a translator conveying their words in English.

To be able to pay for a translator and the cost of travel to Dallas for the finals in June, as well as an earlier tournament in Washington, D.C. last April, Miana and Principal Honoroff worked with their students and parents to hold fundraisers that ultimately generated nearly $10,000. Unlike almost all of the schools participating in the national tournaments, which include elite private prep schools, M.S. 50’s students come almost entirely from low-income backgrounds.

Miana’s bilingual team did not win any rounds in Washington, and she believes that disappointing experience motivated her students to work even harder heading into Dallas. “It was rough for our bilingual students. But they also did everything they could to make sure the outcome would be better in the finals.”

“There was one coach talking loudly into a phone saying, ‘They shouldn’t be here!’ My kids were shaking and crying, listening to adults speaking about them that way. I told that coach that she should be ashamed of herself because our kids are here to debate, just like theirs.”

And it was: her bilingual debaters won four rounds in Dallas. But it was a bruising accomplishment, as some coaches and students on competing teams objected that M.S. 50 was cheating by speaking in Spanish—even though Miana’s group provided headsets and a translator who was not part of their coaching staff. While some local “public forum”-style debates have been conducted bilingually, M.S. 50 was the first school to introduce a second language to national tournament policy debates.

Miana recalls, “There was one coach talking loudly into a phone saying, ‘They shouldn’t be here!’ My kids were shaking and crying, listening to adults speaking about them that way. I told the coach that she should be ashamed of herself because our kids are here to debate, just like theirs.”

It’s the M.S. 50 team, though, who’s altered the course of debate history. Because of M.S. 50’s pioneering performance in Dallas, the National Speech and Debate Association subsequently issued a statement affirming that future debate teams can use languages other than English in tournaments if they also provide an independent translator and headsets.

Indeed, M.S. 50’s experience reflects the New York City public school system’s leadership in recognizing the value of learning multiple languages as foundational for a well-rounded educational experience. Learning more than one language not only enables students to excel academically, it connects them to cultures beyond their own in ways that can break down the kinds of social barriers they experienced in Dallas.

Miana, who is also studying at John Jay College for a degree in anthropology, has further ideas for transforming the culture of school debate tournaments beyond what she has already accomplished. She says, “I really advocate for a new culture in debate that isn’t hostile, but focuses the competitiveness on curiosity in a way that honors what we are doing and the space we are sharing with people from all different backgrounds.”

“[Prinicipal Honoroff] told me that if we’re debating immigration, then we need to debate bilingually—no ifs, ands, or buts about it.”

We thank Miana and the thousands of other DOE staff members and educators who work every day on behalf of the City’s multilingual learners.

Together, We Are DOE.

Official blog for the NYC Department of Education, home of over 1.1 million students across 1,800+ schools

Kids Can Get Free Meals All Summer Long

DOE CelebrationsFeaturedStories from the Classroom

The Year Ends, but the Work Continues